The Weirdest Festivals Around The World!

There’s nothing like travelling the world to help you find the weird, wonderful and unique. Cities and nations across the globe find reasons to hold events and festivals for a variety of reasons: religion, tradition, celebration, giving thanks, and pure entertainment.

There are enough weird festivals taking place around the world annually that they could easily fill a book, from radish sculptures to frog racing, competing to make infants cry to wife carrying and worm charming (no, we didn’t mix up wife charming and worm carrying).

Below we begin to dip our toes into the strange world of festivals across the globe.

The sight of two enormous sumo wrestlers stepping into the ring in preparation for battle is not an uncommon one in Japan, but this particular festival is made unique by the fact that the wrestlers carry a small baby with them. Rather than wrestling each other in the usual fashion, the aim of the game here is to make the babies cry in an effort to bring good luck and ward off evil spirits. If the children are not frightened enough by the big men attempting to intimidate them into tears, the kindly referee will don a terrifying mask and step in. 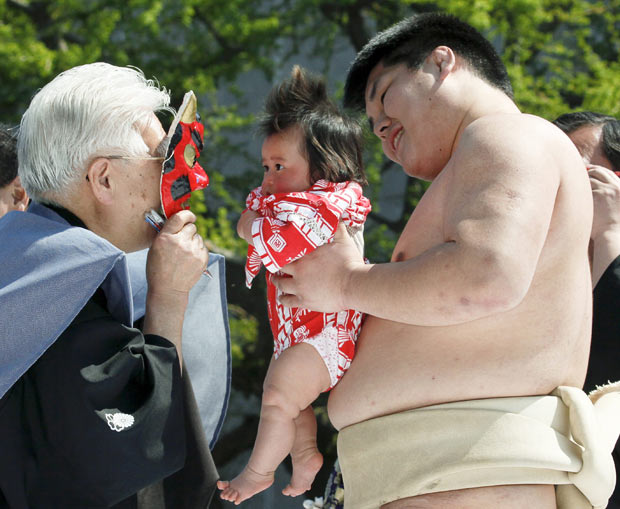 Photo by The Telegraph

Blackawton International Festival of Worm Charming
May in Devon, England

The Blackawton International Festival of Worm Charming in England involves teams attempting to charm as many worms as possible to the surface of their allotted space in a field over a period of 15 minutes. Teams are free to use whatever means they deem necessary to achieve their goal – the only rule is that contestants are not allowed to dig worms up; the worms must choose to journey from their cosy home in the soil of their own accord.

The most popular methods for worm charming are musically inclined – flute playing, singing and drums, though other tactics such as sprinkling water on the soil to trick worms into thinking a refreshing spring rain awaits them at their destination are also used. The punishment for cheating is rather archaic, involving being put in the stocks and publically humiliated.

The Wife Carrying Championships see men competing on a 253.5m obstacle course while, as the name suggests, carrying some of the most precious cargo they ever will. The men are timed but it is not only the quickest who receives a prize – other awards include the strongest, most entertaining and best costume.

The tradition comes from the legend of a local robber baron who pillaged Finnish villages in the 19th century, running off with females along with other odds and ends that did not belong to him. The Wife Carrying Championships have become so popular that they have spawned similar events in the US, Hong Kong, India and many other places.

The origins of this festival are somewhat less steeped in tradition than others on the list. The event was created by the Boryeong Health Life Company in an attempt to promote their cosmetic products, which feature the allegedly cleansing and healing mud of the area.

Held annually at Daecheon Beach in South Korea, the festival is pretty much an excuse to get as dirty as possible – while simultaneously treating your skin of course. The event is popular with the expat population rather than locals, and features activities such as mud photography and mud massages. 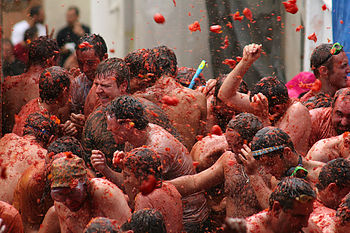 In the sweltering heat of the Spanish summer, thousands of people descend on the town of Bunol near Valencia to ruin 40 metric tons of tomatoes as quickly as possible in a huge food fight. Revellers tend to wear white as they await the trucks that will soon dump piles of tomato ammunition – and then the war begins.

Held in the self-proclaimed frog capital of the world (the event information is rather full of unsubstantiated statements such as this one), the Rayne Frog Festival includes frog races, frog jumping, musical performances, frog-themed runs, fairs and activities. Cajun-style frogs’ legs are a popular delicacy at the festival, which also includes the selection of a Frog Derby Queen – a prestigious title if ever there was one.

This is not a buffet of monkeys, but a buffet for monkeys. Created in 1989 for no reason other than to bring tourists to the area of Thailand, the event sees an enormous spread of 4000kg worth of fruit, vegetables, cake and candy on offer for the population of approximately 3000 monkeys in the area. The event encompasses plenty of monkey-themed entertainment, including dances, music, masks, sculptures and costumes.

Visitors should be warned that these monkeys are quite accustomed to human visitors, so will have no problem climbing on spectators or ‘borrowing’ food – or expensive technological items.

Directly translating to ‘Night of the Radishes’ in English, this festival in Mexico began when local growers had the ingenious idea of carving their produce in an effort to attract customers. Visitors are treated to intricately and ornately carved radish sculptures for one night only – the material is rather perishable – with some specially-grown radishes weighing up to seven pounds offering a rather unique artistic spectacle.

Courtney Gahan is a serial expat, traveller and freelance writer who has bartered with Moroccan marketeers, seen the sun rise at Angkor Wat and elbowed her way through crowds on NYE in NYC.

5 Unique Destinations To Have a Tea Party Adrenaline Junkie